With pumpkin season in full swing, you need this Pumpkin Fudge in your life. Made without fluff, it's perfectly crumbly and melt-in-your-mouth delicious!

(This recipe for Pumpkin Fudge was originally posted in October 2008, but was updated with new photos in 2019).

Sick of pumpkin yet? Well, it's only October 15, so you better not be. I'm not quite sure where I got the idea, but all the sudden I decided I wanted to make pumpkin fudge. Then I did some reading and saw that fudge is kind of difficult to make. But being the daring baker I am, I was determined to give it a go.

I realized that if I wanted any chance of the fudge coming out edible, I would need a candy thermometer (affiliate link), which is a thermometer that goes up to at least 240 degrees F.  Then I started doing research on fudge techniques that are reasonably easy and don't involve fluff. For some reason, the idea of using fluff in baking is really unappealing to me, though I love a good peanut butter and fluff sandwich as much as the next person (not that I've had one since age 10). But in my fudge? No thanks.

The ingredients for my pumpkin fudge are pretty simple and nope, no fluff involved! They're pretty basic fudge ingredients, including granulated sugar, corn syrup, and milk... And obviously since this is pumpkin fudge there is pumpkin puree involved! Right before it's done, you'll stir in butter (a whole stick!), pumpkin pie spice, and vanilla. Omg it's so good.

I only had a mild panic attack when I couldn't find pumpkin puree in the first 3 grocery stores I went to. Both Trader Joe's I went to told me it "isn't quite pumpkin season yet." Umm liars! I have been buying pumpkin puree there for two months now. I almost hugged the stock person at Stop & Shop who pointed me to the shelf and said they had restocked it just minutes ago. This pumpkin fudge was saved and I bought 4 extra cans of pumpkin...just in case.

Anyway, with a bit of trepidation, I started on the fudge. First, I combined the sugar, milk, corn syrup, pumpkin, and salt in a saucepan and brought it to a boil over high heat, while stirring constantly. Looks like witches brew! Whatever that is. Once it was boiling, I brought the heat down to medium and let it boil without stirring, while I patiently waited for the mixture to reach 232 degrees F., which is "soft ball stage." This means if you take a drop of the mixture and drop it into cold water, it will form a ball that will flatten when picked up.

Once the mixture finally reached 232 degrees, I took the saucepan off the heat and stirred in the stick of butter, pumpkin pie spice, and vanilla. I let it cool until it was about 120 degrees F, which took a while (about 45 minutes). Then I beat the mixture with a whisk until it got really thick and started to stick to my whisk and spoon hardcore. That's a sign it's done and ready to be poured into a lightly buttered 8x8 pan.

Let it sit in the pan for about 30 minutes so it can harden. Then, slice it up and dig in.

Because there was no fluff involved in the making of this pumpkin fudge, it's definitely a more crumbly fudge. At first I found myself wishing it was a little softer, but upon doing a quick Google search, I discovered many people actually looking for recipes for good crumbly fudge.

And this fudge is seriously melt-in-your mouth good. It's also addictive. I legit could not stop eating it. Which is exactly why you need to just bring it with you to a fall party or gathering. Or force it upon your neighbors. They'll thank you and you'll thank them.

I will definitely be making this again and am also pretty excited to try a chocolate peanut butter edition. Fudge could very well be my new obsession, long after pumpkin season is over. Which hopefully won't come too quickly.

I need at least a couple months to whip up more pumpkin fudge, concoct new pumpkin recipes, and discover all the new pumpkin products at the grocery store. It is SO on.

Have you ever made your own fudge before?

If you're full-on celebrating pumpkin season, try out my recipes for Pumpkin Mac and Cheese and Pumpkin Ice Cream with Pistachio Swirl. 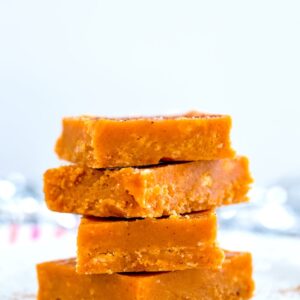