If you're looking for a doughnut that's a little bit healthier, try these baked Strawberry Frosted Doughnuts! They're made with vanilla Greek yogurt and are a whole lot easier to make at home than fried doughnuts!

(This recipe for Strawberry Frosted Doughnuts was originally published in March 2011, but was updated with new photos in 2019).

In case you haven't noticed, doughnuts are definitely the talk of the Internet lately. And I don't think that's going to stop any time soon. The thing is, they're also the talk of my kitchen, too. While I love seeking out a great donut shop, there's something so awesome about making them at home. Which can get slightly dangerous. And mess when you consider all that oil splattering everywhere (and I can't be the only one who hates the way my house smells after frying). Luckily, baked donuts are ridiculously easy to make. Not to mention, they create much less of a mess and are much healthier.

Especially these strawberry frosted doughnuts. Not only are they healthier because they're baked, but they're also made with yogurt. I used a low-fat vanilla Greek yogurt (Cabot is my favorite!) to get some added vanilla flavor. And then I made a deliciously simple strawberry icing to dip the doughnuts in.

If you're looking for a good donut pan, this is the one I have (affiliate link). I've had it for years and have used it a ton!

Finding a delicious baked doughnut can be tough. And I'm not going to lie; these strawberry frosted doughnuts don't taste like fried doughnuts. So if you're craving a fried doughnut, go out and get yourself one (or make them yourself)! But if you want a delicious doughnut you can eat without feeling totally weighed down, try these baked ones.

First of all, this vanilla bean Greek yogurt from Cabot is seriously heavenly. You can even see the little specks of vanilla in it, which makes me so, so happy. I waited what seemed like forever for my grocery store to stock it and at long last, they did! Now it's a definite fridge staple. I used the yogurt in both the doughnuts and the icing.

OK, let's get started on the vanilla doughnuts! I promise they're super easy to make; you don't even need a mixer. Start by pre-heating your oven to 375 degrees. Then simply whisk together all the dry ingredients (flour, sugar, baking powder, cinnamon, and salt) in a medium bowl. In a separate bowl, beat yogurt, eggs, oil, and vanilla. Pour the wet ingredients into the dry ingredients and stir until just combined. Don't over-mix or your doughnuts will likely be too dense. This is one of the biggest complaints people have about baked doughnuts.

Make sure your doughnut pan is greased or buttered. Even if it's a non-stick pan, you'll want to oil it well as healthy-ish doughnuts can tend to stick. Fill each doughnut form about ¾ of the way full. I like to put my batter in a ziplock bag and cut the corner off, so I can essentially pipe the doughnut batter into the pan.

Bake doughnuts for 10-12 minutes, until they're turning golden and spring back at the touch.

Let doughnuts cool in the pan for a few minutes before removing to a wire rack so they can cool completely.

I absolutely love strawberry frosted doughnuts and since I had some frozen strawberries in my freezer, I decided to make a strawberry icing. Of course, you could also use fresh strawberries if you prefer. Again, I decided to use Cabot's vanilla Greek yogurt for the icing, instead of butter. This makes a much healthier icing! You could probably half my below recipe since I was left with quite a bit of leftover icing (not always a bad thing).

In a blender or food processor, puree strawberries until nice and smooth. Whisk together confectioner sugar and yogurt until well-blended.

Pour about 3 Tbsp strawberry puree into the mixture.

And stir until combined. The icing is definitely a bit thinner than the typical butter-based icing (you can stick it in the fridge to thicken it a bit if you want).

Make sure your doughnuts are completely cooled and then dunk the tops of the doughnuts into the strawberry icing. I dunked a couple times on since the icing was thin and seemed to get sucked right into the doughnut.

These doughnuts ended up being an absolutely delicious treat and just what I needed to get my day off to a great start. As noted, baked doughnuts are definitely a bit more cake-y than your typical fried doughnut, but that's not necessarily a bad thing. These ones are incredibly moist (thanks to all that yogurt!) and packed with vanilla flavor.

I have to admit that I ate one of these strawberry frosted doughnuts for breakfast a couple days and I felt much better afterwards than I would have had I eaten a fried doughnuts. Not that I'm trying to shame fried doughnuts (TRUST ME, I eat my fair share); I'm just saying, this was still a treat without quite as many calories.

My verdict? Really, nothing compares to a fried doughnut. But if you're looking for something a bit healthier that's still absolutely delicious, baked doughnuts made with vanilla Greek yogurt is a fabulous option.

And it just means you can eat more doughnuts. More often. Without splattering all that oil all over your kitchen.

What's your favorite swap or technique to make baked goods a bit healthier?

If you like this donut recipe, be sure to check out my Milky Way Doughnuts (also baked!) and my Glazed Coffee Chocolate Frosted Donuts (these ones are fried!). I also can't wait to try these Baked Peanut Butter Donuts from Jo Eats! 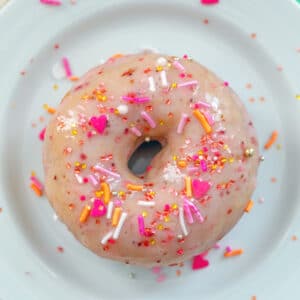