Beer in cupcakes? These Guinness Cupcakes have Guinness in both the cupcake and the frosting and are absolutely delicious. They're the perfect St. Patrick's Day dessert, but can be enjoyed any time of year!

(This recipe for Guinness Cupcakes was originally published in June 2009, but was updated with new photos in 2020).

After realizing alcohol in cupcakes is amazing (see red wine cupcakes), my mind started working overtime. What else could I do? What other alcohols could I involve in my baked goods?

Then I realized the only logical next step. Beer! But beer in a cupcake? Would it work? I immediately thought that Guinness would be the best bet. Really, you could use any kind of stout here, but since Guinness is basically the official beer of St. Patrick's Day, I chose the super popular brand and got to work.

These Guinness cupcakes are very easy to make, though this technique is just just a little bit different in that it has you melting the butter into the beer as the first step. You thought Guinness was delicious... How about Guinness with butter mixed in?

Using melted butter in cupcakes results in a bit of a denser and richer cake. So, this may not be the recipe for you if you are looking for super light and fluffy cupcakes. But if you like a sturdier cake, these are perfect!

There tends to be a fine line for density in baking. "Dense" can get a bad name, but when it comes to chocolate cakes, I often love a little density as it makes them richer and more decadent. The dark brown sugar and sour cream contribute to this richness a bit, too. Overall, this technique results in the ideal chocolate cupcakes for me.

Another great thing about this melted butter cupcake method is that you don't need a stand mixer or even a hand mixer... It's all done in the large saucepan in which you melt the butter and Guinness together!

HOW TO MAKE GUINNESS CUPCAKES

To start, line 2 cupcake tins with cupcake liners and pre-heat oven to 350 degrees.

Add Guinness and cubed butter in a large saucepan over medium heat and whisk until butter melts; remove from heat. Whisk in cocoa powder and brown sugar.

In a separate small bowl, whisk together the sour cream, eggs, and vanilla. Add that to the beer and butter mixture.

In a separate large mixing bowl, sift together flour, baking soda, and salt. I do recommend sifting since I've noticed this batter has a tendency to get a bit lumpy and sifting the dry ingredients definitely helps prevent this from happening.

Fold the flour mixture into the chocolate mixture, folding until the dry ingredients are all incorporated and most lumps are gone. But take care not to over-mix as this can result in dry cupcakes. It's OK if you have a few lumps!

Divide the batter between the cupcake liners, filling them about ¾ of the way full.

And bake the cupcakes at 350 degrees for 19-21 minutes, until a toothpick stuck into the center of a cupcake comes out clean. Let cool for a few minutes in the pans before removing to a rack to let cool completely.

The first time I made these Guinness cupcakes, I made a sour cream frosting, which was delicious. But this time I opted for a Guinness frosting instead. Really, it's just a simple buttercream frosting with Guinness mixed in instead of milk.

If you want to get really crazy, you can add a couple drops of green food coloring to your Guinness frosting, but I kept my frosting natural and added a green sprinkle mix instead. Plus, I used some green cupcake papers.

I used a Wilton #1A pastry tip to frost the cupcakes, which I think is one of the easiest and visually appealing ways.

If you're not planning to bring all 24 Guinness chocolate cupcakes to a St. Patrick's Day celebration, I recommend digging into one right away.

I think I love everything about these. I really like that the beer flavor is present, but not overpowering. Guinness fans will likely go wild for these, but your friends who don't like beer should also enjoy them. Because that chocolate flavor is bursting through the subtle nuttiness of the the beer.

Similarly, the Guinness frosting is a dream. It's light and fluffy and perfectly sweet with a super subtle Guinness taste. If you're going to celebrate Guinness this St. Patrick's Day (or any day), you may as well go big, right??

But really, you can make these cupcakes at any time of year, because stout is always in style and there's no wrong time for chocolate stout cupcakes.

And can I tell you a secret? These cupcakes taste even better with a glass of Guinness on the side!

Do you like to bake with Guinness during St. Patrick's Day?

If you're looking for more delicious St. Patrick's Day desserts, try my Lucky Charms Cookie Dough Bars and my Guinness Doughnuts with Irish Whiskey Frosting. And for a savory Guinness recipe, this Irish Guinness Beef Stew from Chew Out Loud looks incredible! 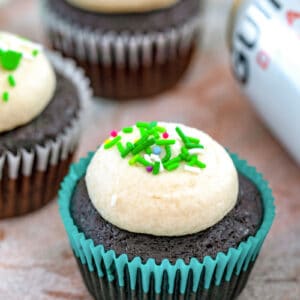 Beer in cupcakes? These Guinness Cupcakes have Guinness in both the cupcake and the frosting and they're absolutely delicious. They're the perfect St. Patrick's Day dessert, but can be enjoyed any time of year!
No ratings yet
Print Pin Rate
Course: Dessert
Cuisine: American, Eclectic
Keyword: Beer Desserts, Boozy Cupcakes, St. Patrick's Day Dessert
Prep Time: 20 minutes
Cook Time: 20 minutes
Makes: 24 cupcakes