(This recipe for Guinness Doughnuts with Irish Whiskey Frosting was originally published in March 2013, but was updated with new photos and content in 2019).

Am I a bad part Irish Bostonian if I say I’m not really a huge fan of St. Patrick’s Day? Probably. I’m also probably a 93-year-old. Because I think it’s really just that I don’t like holidays on which people feel the need to get ridiculously drunk for no apparent reason, which is exactly what so many Bostonians do.

Of course, this is not to say I can’t get into the St. Patrick’s Day eating (corned beef!) and drinking spirit. You know I enjoy a cocktail or five myself. And now that I’m a 30-something living in the suburbs, there’s a lot less pressure to go crazy, which allows me to enjoy the finer things about St. Patrick’s Day… Like wearing green, eating green foods, and drinking a couple Irish libations (but no green beer, please!).

And so you won’t be surprised to hear that these doughnuts contain two types of alcohol between the cake and the frosting. And yes, that frosting? Let’s just say the whiskey was diluted by NOTHING, which is exactly how it should be. Potent.

And considering I’m talking about St. Patrick’s Day a month out, I must not dislike it that much (I have another recipe coming at you next week!). But really, you can make these Guinness doughnuts any day of the year… You may just want to go with a frosting that’s not quite so vibrantly green.

As much as I wanted the Guinness flavor to come through in these Guinness donuts, I also knew it would be a little bit too much if there wasn’t another flavor profile. I figured chocolate would be perfect, but opted for chocolate milk for a lighter creamier chocolate as opposed to a cocoa powder. I used chocolate soy milk, but you can use any milk or dairy alternative.

Baked doughnuts are like really ridiculously easy to make and these baked Guinness doughnuts are no exception. I couldn’t even believe how quickly they came together. And let me tell you, I am not speedy in the kitchen.

Start by whisking the dry ingredients together in a large bowl. And then combining the wet ingredients in a separate large bowl, including the Guinness and chocolate milk.

Stir the wet ingredients into the dry. This is where you need to be careful to stir just until the ingredients are combined, taking great care not to over-mix. Over-mixing your batter will give you cakey doughnuts, which is a big reason why people say they don’t love baked doughnuts. Too cakey is not good!

Spray your doughnut pan with oil and fill about 3/4 of the way full with batter.

And bake the donuts for 8-10 minutes at 325 degrees until they’re cooked through and light and springy to the touch. Remove from the oven and let cool in the pan for a few minutes before removing to cooling racks. Repeat with second batch of doughnuts (if your doughnut pan only holds six).

Remember, you want your doughnuts to be completely cooled before frosting! Otherwise…. disaster.

HOW TO MAKE IRISH WHISKEY FROSTING

If you thought those doughnuts were easy, wait till you see this Irish whiskey frosting. Pretty much all you need to do is whisk all the ingredients together (aside from the food coloring).

And then add a little bit of food coloring and stir to combine. The first time I made these, I went with a super light green whiskey frosting, but this time I decided to go all out and be bright and bold!

OTHER VARIETIES OF BEER DOUGHNUTS

Don’t have Guinness? Want beer doughnuts in October and not on St. Patrick’s Day? The good news is that you can use any beer in these doughnuts. You can substitute regular milk for chocolate milk in the batter (if chocolate doesn’t go with the beer choice) and substitute milk for the Irish whiskey in the frosting (or you can use another flavoring of choice). Some of my favorite options are:

But I should also say that Guinness doughnuts with Irish whiskey frosting can be enjoyed any time of year and not just on St. Patrick’s Day.

And once the frosting is made, you’re done! Well, you still have to frost the doughnuts. Which is probably the most difficult part of this whole shenanigans. The frosting is drippy and messy. And green. But in a really good way.

I also recommend adding some festive sprinkles. Gold would be pretty, but I loved my mix from Sweetapolita!

Smelling the whiskey frosting might get you a little tipsy though. So, I’m not sure what that says about tasting it? Yes, it’s potent. I briefly considered mixing some vanilla or something into the frosting, but then said no.

The Irish would not approve of that. And the sugar does a good job of balancing the liquor.

I mean, not that the Irish would probably approve of adding chocolate soy milk to Guinness donuts. But oh well. Just focus on the Guinness people…

Whenever I make baked doughnuts, it’s always my goal to make a doughnut that’s super moist rather than cakey and dense. These definitely succeeded. Thank you Guinness and soy milk. And the care I took in not over-mixing the batter (LOL).

You can go out and drink a ton on St. Patrick’s Day. Or you can sit home and eat a bunch of these Guinness doughnuts. Wait, I don’t think either of those options is overly healthy. But maybe you could just go out for a little bit and then come home and eat ONE of these?

But you’ve got to make them. Because I’m pretty sure they don’t sell anything like this at Dunkin’ Donuts. Annnd they’d probably be sued if they did based on the alcohol content. And then Boston would get a whole lot rowdier.

How do you celebrate St. Patrick’s Day?

If you’re looking for some baked donut recipes that don’t have quite as much alcohol in them, check out my Lucky Charms Doughnuts (also great for St. Patricks’ Day!) and my Blueberry Mojito Doughnuts (they taste like mojitos, but there’s no alcohol involved!). And these Chocolate S’mores Baked Doughnuts from Kitchen Sanctuary look like so much fun! 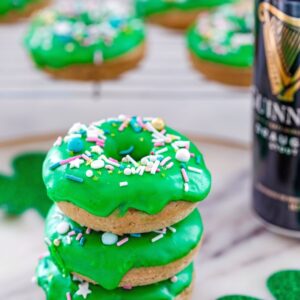