You don't have to be Irish and it doesn't have to be St. Patrick's Day for you to fall in love with these Chocolate Stout Cupcakes with Irish Whiskey Filling and Baileys Frosting! They're a delightful boozy dessert no matter the time of year!

(This recipe for Chocolate Stout Cupcakes with Irish Whiskey Filling and Baileys Frosting was originally published in March 2011, but was updated with new photos in 2019).

When I first set out to make these, I wasn't even going to post them because I already posted about Guinness cupcakes in the past. Plus, St. Patrick's Day was weeks ago and I was making these for my family's post-St. Patrick's Day celebration.

But then, then... they were too awesome not to post. And it's not like you only drink Guinness at St. Patrick's Day, right? And Baileys? And whiskey? These cupcakes are totally appropriate year-round!

My dad had originally sent me a chocolate stout cupcake recipe, but it was vegan and involved ingredients like vegan margarines and shortening. But once I got the chocolate stout cupcake in my head, I couldn't get it out, so I found a sort of similar recipe on Serious Eats by CakeSpy (adapted from my fave Smitten Kitchen) and adapted them a bit more to become these beauties.

Why you'll love this recipe

These are legitimately the best St. Patrick's Day boozy cupcakes! How could you not love a cupcake with three kinds of alcohol in them? Especially during the St. Patrick's Day holiday. Of course, they also make an excellent party cupcake!

I really think your friends and family will love you forever if you make them these cupcakes. Not that they wouldn't anyway, but it still can't hurt. Solidify your relationships forever!

At first they may seem like quite a lot of work, but the filling and frosting are super simply to make. You'll just have to wash your mixing bowl out a couple times.

The cupcakes are incredibly moist and they're packed with rich chocolate flavor. Despite the fact that there is chocolate stout, whiskey, and Baileys in the cupcake, they're not overpowering or too boozy tasting at all.

My version of chocolate stout cupcakes involves Guinness. And while I think Guinness is the most appropriate drink during the St. Patrick's Day season, you can obviously make these with any kind of stout. I also love Young's Double Chocolate Stout.

There are 3 steps to making these: the cupcake, the filling, and the frosting. Don't skip any of them! I'm begging you. Here's what you need for each part (see recipe card below for ingredient amounts and full instructions):

How to Make chocolate stout cupcakes

To start, bring stout and butter to a simmer in a large, heavy saucepan over medium heat. Add cocoa powder to the saucepan and whisk the mixture until it's smooth. Remove saucepan from heat.

The mixture may look separated and a little weird, but don't worry; it will all come together!

In a separate medium bowl, whisk together the flour, sugar, baking soda, and salt.

Then, in the bowl of a stand mixer or in another large bowl (I know, you will dirty A LOT of bowls up with this recipe... But it's worth it) with a hand mixer or whisk (and a lot of arm strength), beat together the egg and sour cream. Add the chocolate stout mixture to the egg mixture and beat until just combined.

Add the dry mixture to the wet mixture and beat until just combined. Be careful not to over-mix as this will result in dense cupcakes.

Not the prettiest looking batter... But I promise, it works!

Divide the batter among 12 cupcake liners, filling them about ¾ of the way and bake at 350 degrees for 17-20 minutes, until a toothpick inserted into the center comes out clean.

Let the cupcakes cool in the pan for a few minutes and then take them out to cool completely on a rack. I was psyched by how these chocolate stout cupcakes rose.

You can never be sure what they'll look like when they're done baking (and I often over-fill causing them to get huge and oddly-shaped), but these were perfect.

How to make Irish whiskey filling

While your chocolate stout cupcakes are cooling, you can make the whiskey filling. It's a simple ganache that is so, so easy to make. Place the chopped bittersweet chocolate it in a heatproof bowl.

Heat the cream on the stove until it's just at the point of boiling, being sure to remove it from the heat right when it reaches boiling.

Pour the cream over the chocolate and let it sit for a minute so the chocolate starts to melt. Then stir the mixture until smooth. If your chocolate doesn't melt all the way, you can definitely pop this in the microwave for 10-20 seconds or put it in a double boiler for a couple minutes.

But if your cream is hot enough and your chocolate chopped finely enough, you should be fine.

Now, add the butter, Baileys, and Irish whiskey, and stir to combine. And yes, I added Baileys to my Irish whiskey ganache filling because it felt necessary. P.S. this smelled amazing! I wanted to grab a spoon and just dig in.

Instead of eating the whiskey ganache with a spoon, I waited until my cupcakes were cooled so I could fill them. You'll need to core out a little section from the middle of each of your cupcakes. You can do this with a knife, but I love my little cupcake corer.

I seriously get so much use out of this baby and it makes the coring process so quick and easy!

Now, using a spoon, carefully fill each cupcake with the whiskey filling. I filled mine to the brim!

How to make Baileys frosting

Almost done! You just have to make the fabulous Baileys frosting. In the bowl of an electric mixer or in a large bowl with a hand mixer, beat butter on medium speed until it's nice and fluffy. Then add the confectioners' sugar and beat in until well combined.

Add in the Baileys and whip it until combined. If you want your frosting a bit thicker, you can feel free to add in some more confectioners' sugar.

Pipe the Baileys frosting onto cupcakes. Or just spread it; whatever floats your boat. I use a Wilton 1A pastry tip to just do the dollop of frosting on the cupcake.

You can add sprinkles if you want! I pretty much always do.

I honestly think these chocolate stout cupcakes are the most delicious cupcakes I've ever had. I can't decide if it's because of the Guinness cupcakes, the whiskey filling, or the Baileys frosting. Really, I think it's the combination of the three all hitting your palate at the same time.

If you're one of the people thinking, "omg that's too much alcohol for one cupcake!" I am here to reassure you that it's really not overpowering. Yes, you can taste it, but in a really pleasant way.

The Guinness in the cupcakes is light and nicely balanced by the chocolate. The same goes for the whiskey and Baileys in the filling.

The chocolate is so bittersweet and powerful that the alcohol becomes just a slight part of the profile.

And the Baileys frosting?? Well, it just so happens that when you mix Baileys with lots of sugar and butter, you can't even tell that it's alcoholic. It's just pure heaven!

Obviously I have to show you how that Irish whiskey filling hardens as it cools and becomes the happiest little surprise in the middle of an already delicious chocolate stout cupcake.

If you're in a super rush and don't want to make the filling, I promise that the cupcakes and frosting can stand on their own and nobody will realize something is missing. But man, once you experience the whiskey filling, you may not be able to live without it!

I have a reputation among my friends and family for being the Queen of boozy desserts and I'm kind of proud of that. Here are some more of my favorite recipes for desserts that involve alcohol:

I mean, just in general, you probably won't be able to live without these cupcakes. So even though you're seeing chocolate stout cupcakes with whiskey filling and Baileys frosting all over the place during St. Patrick's Day season, you can absolutely make these cupcakes at any time of year.

It would be an absolute shame to only have them once a year.

So, now that I've successfully created a dessert with 3 kinds of alcohol, I don't know where to turn next. I probably need a boozy dessert break before my liquor shelf breaks from buying more...

Unless anyone has a fabulous idea for what to make with cotton candy vodka or peanut butter vodka... Because for whatever reason, I seem to have a surplus of those.

What is the best cupcake you've ever had? 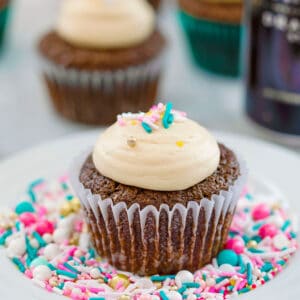 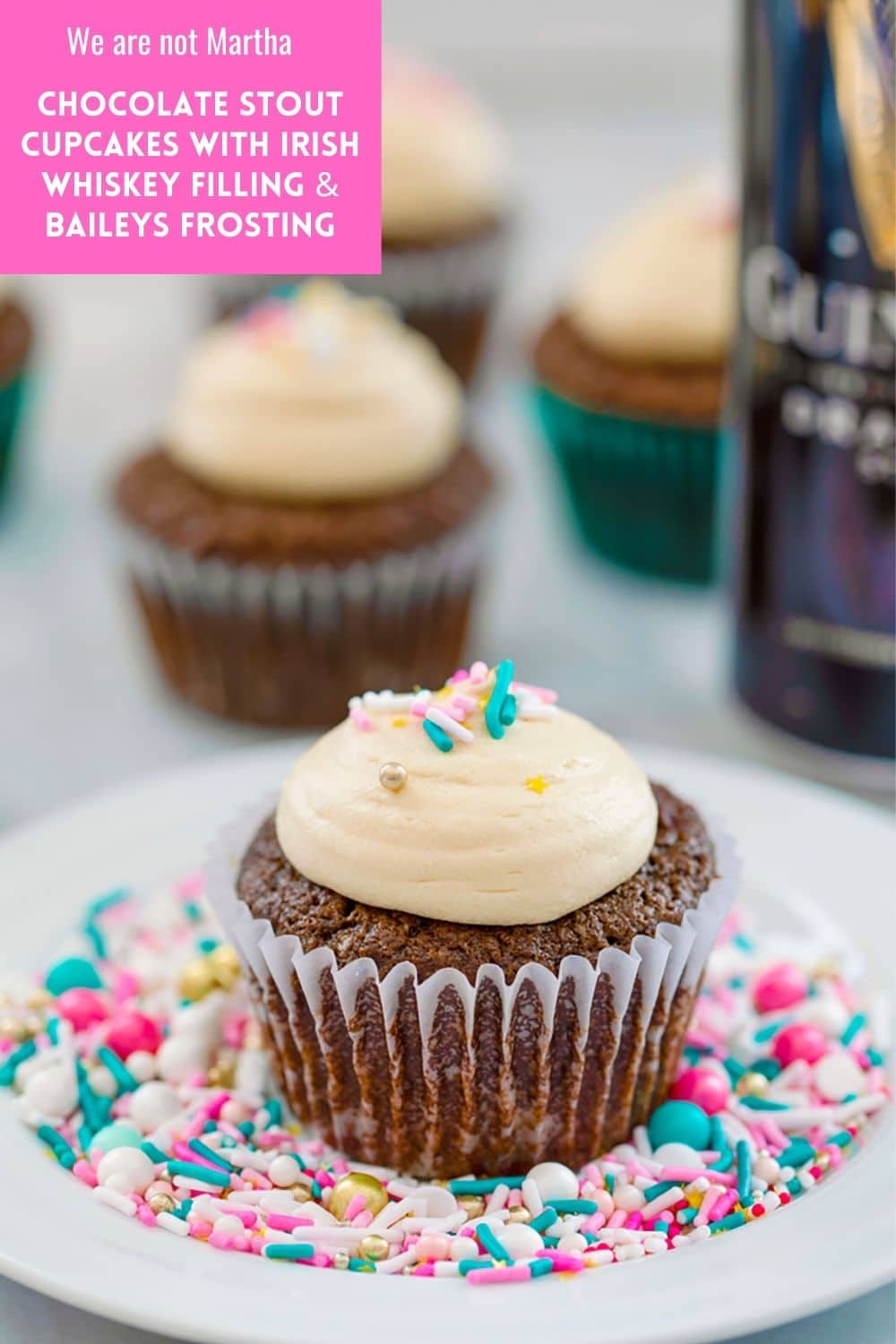