This BBQ Chicken Pizza is inspired by a menu favorite from California Pizza Kitchen. With simple ingredients and a homemade crust (or store-bought if you want!), it can easily be made and enjoyed at home.

First, let me start off by saying that once upon a time, I adored California Pizza Kitchen's BBQ Chicken Pizza. CPK is one of those places I would eat at after as a broke just-out-of-college girl after a busy day of "window shopping" at Copley Plaza in Boston.

These days, if I'm going out to eat, I like to go to non-chain restaurants, especially since there's always something new opening in the Boston-area.

But I still think about that pizza sometimes and get all kinds of nostalgic. So, I did what any pizza obsessed blogger would do, I made my own California Pizza Kitchen BBQ Chicken Pizza at home!

Though the ingredients seemed pretty obvious, I based the recipe off The Pioneer Women's CPK BBQ Chicken Pizza recipe (and through her commenters learned that smoke gouda is the magic ingredient!).

First, you have to make your dough. It's just so simple and yes, it might make a little bit of a floury mess on your countertop, but it's always worth it.

To be able to say you made the entire pizza from scratch is just admirable and your friends will think you're that much cooler.

If you're really not in the mood to make your own (I promise, it will take about 5 minutes... Plus the 2 hours rising time), of course you can buy store-bought. Just be sure to note that this recipe makes two BBQ Chicken Pizzas, so either buy two pounds of dough or cut the topping ingredients in half.

Once the dough is made, smother the chicken breasts in BBQ sauce and bake them at 375 degrees for 15-20 minutes, until the chicken is cooked through and registers at 165 degrees.

Then roll our your dough and brush a little more BBQ sauce over it.

And add the rest of those beautiful toppings. There's actually not a ton you'll need for this BBQ chicken pizza; it's a beautifully simple one. Just add:

Once you bake it for 13-15 minutes at 500 degrees, it will be perfectly golden with the toppings nice and bubbly.

But don't forget to add the cilantro. I'm not even the biggest cilantro fan, but it's SO good here.

To serve the BBQ chicken pizza, cut it into square and serve nice and hot, fresh out of the oven.

Did you know I am usually seriously anti-square pizza?? I have no idea why, but something about it brings back really bad memories for me (maybe school pizza??). If you take me out to a pizza shop or order me takeout and it's square pizza, I will not be a happy camper.

But when it comes to homemade, I love square pizza and make it often. I think I love that squares are generally smaller than normal pizza slices, which means you can eat more!

This CPK BBQ chicken pizza did not last long in this house. I really love the BBQ sauce base over traditional tomato sauce and naturally BBQ goes superbly with chicken.

It's basically a no-fail recipe and an automatic people-pleasing pizza! It's especially perfect for a summer party and goes really well with beer. Trust me on this!

I'm just thrilled I can have my California Pizza Kitchen BBQ chicken pizza without even leaving my house!

I always say I could eat a different pizza every night of the week and be perfectly happy. In fact, I think I could eat it for breakfast, lunch, and dinner for weeks at a time and be thrilled. Here are a few of my favorite pizza recipes:

Do you have a favorite restaurant pizza that you'd love to recreate at home? 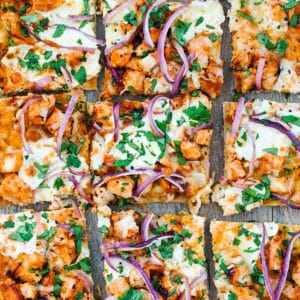 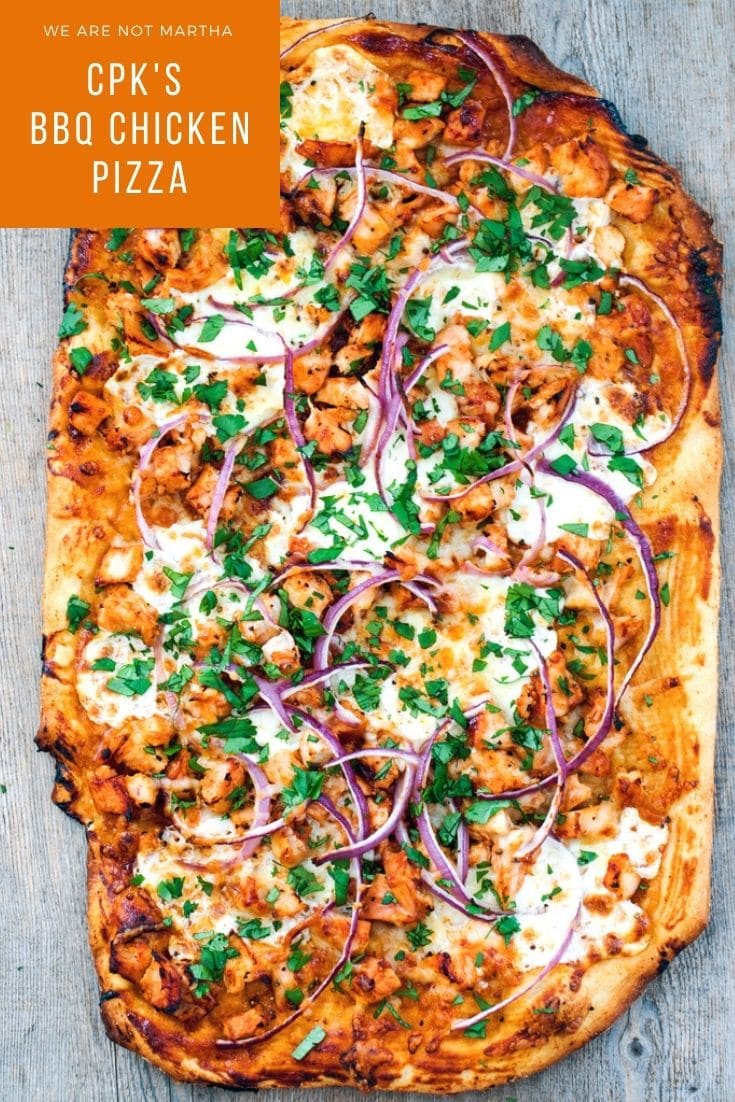