For the ultimate simple fall comfort food, make this Cinnamon Sugar Brie and Apple Grilled Cheese. With layers of melty brie and apples sandwiched between toasty cinnamon sugar bread, this is the kind of comfort food you crave in the fall.

It's getting to be that time of year again... The time where I want ALL the comfort food. For every meal. And if you ask me, grilled cheese qualifies as the kind of comfort food that's fit for breakfast, lunch, or dinner (yes, I will forever justify grilled cheese as a breakfast food... Just add an egg and call it an egg and cheese sandwich).

Cinnamon sugar toast reminds me of childhood and also brings such a comforting feeling to me. It's warm, buttery, and sweet. And is loved by both kids and adults alike.

In true fall fashion, I made it a brie and apple grilled cheese. And it might be the most comforting sandwich I've ever made.

What Kind of Apples Should I Use?

The variety of apple you use for this brie and apple grilled cheese is totally up to you, but I keep my fridge stocked with honeycrisp apples for as long as I can find them and I love them in this sandwich.

I do recommend a good sweet apple here, but if you want to cut the sweetness of the grilled cheese a bit (you know, considering it's made with cinnamon sugar bread!), you can use granny smith or another more tart variety.

Honestly, there's no apple that wouldn't be delicious in this sandwich!

How to Make Cinnamon Sugar Brie and Apple Grilled Cheese

This is a pretty simple grilled cheese recipe, but with one very important step. You need to cinnamon sugar-ify your bread before grilling it up.

Simply mix cinnamon and sugar together in a medium bowl (use a bigger bowl than you think you'll need since you'll want to toss the apple slices in it, too). Then spread butter on one side of each slice of bread and sprinkle on a generous amount of the cinnamon sugar mixture.

Toss the apple slices in the bowl with the remaining cinnamon and sugar.

Place buttered cinnamon sides of bread on a skillet or griddle over medium-low heat.

Layer brie cheese on all four slices of bread and then cinnamon sugar apples on two of those slices.

Sandwich bread together and grill for about two minutes before flipping and grilling for another two minutes, until the bread turns golden and cheese gets melty.

This cinnamon sugar brie and apple grilled cheese has everything I like in a grilled cheese sandwich. Lots of melty cheese, crispy bread, and a whole lot of sweetness.

OK so sweetness isn't usually a requirement for my grilled cheeses, but now that I know the deliciousness of cinnamon sugar grilled cheese, it just might start to be.

If you're looking for a sandwich that tastes like all the comforts of fall, I'm pretty sure you just found it!

Obviously, you can make this cinnamon sugar grilled cheese with any fillings alterations/substitutions you want. Here are a few other filling recommendations. Lots of different fruits and cheeses match really well together.

All of these combos would be delicious melty and sandwiched between two slices of cinnamon sugar bread:

Now can you see why I said I'd eat grilled cheese for breakfast? This one doesn't even require an egg on top.

This cinnamon sugar brie and apple grilled cheese is the best kind of comfort food no matter what time of day you're enjoying it.

If you're looking for more delicious grilled cheese sandwiches, check out some of my other recipes:

I also can't wait to try this Pesto Grilled Cheese from Something About Sandwiches! 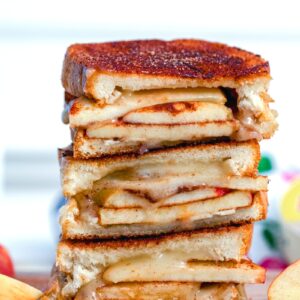