I know reality TV is so 2002, but it's still pretty much my favorite variety of television. All I can really handle in my life right now is mindless, easy television that I can watch while I'm doing one of a million other things, including working, writing blog posts, recipe planning, playing/cuddling with my dog, and/or accidentally passing out on the couch.

I just love that I can half watch shows like The Bachelor and still, for the most part, understand what's going on. Also, it's oftentimes ridiculous and indulgent, which I absolutely love. I think most of us could use a little bit more ridiculousness and indulgence in our lives and I feel no shame in getting that from my television-watching.

And from my ice cream, too. I mean, I think red velvet in general is kind of ridiculous and indulgent, but in the most fun way possible.

Turn it into ice cream and add in red velvet cookie dough (double the red velvet!) and I'm just ridiculously happy. That's what I did here and I ended up with one of the most fun ice creams I've ever made.

How to Make Red Velvet Ice Cream with Cookie Dough

I tried to keep this ice cream pretty true to red velvet, so I made it with buttermilk instead of milk and mixed in a little cocoa powder, too. I was going to do a cream cheese swirl, but started craving cookie dough and thought a little red velvet cookie dough would be even more delicious (sue me, but I'm not a huge lover of cream cheese in desserts).

I ended up putting some of the red velvet cookie dough in the ice cream and then snacking on way too much of the remaining. Oops!

The red velvet ice cream is a pretty typical custard-based ice cream and I promise it's not difficult to make. It just requires a whole bunch of chilling time, so make sure you plan ahead!

I'm big into making homemade edible cookie dough these days and it's super easy to do, too. Obviously there is no baking required! It just requires mixing all the ingredients together.

And then trying not to eat too much before you mix it into the red velvet ice cream.

If you thought reality TV was indulgent, you should try eating red velvet ice cream with cookie dough on the couch while watching reality TV. But come on, you work hard and you deserve it.

I haven't watched Big Brother since college, but I got a little sucked in this season. It's so bad that it's good. That really is a thing.

The funny thing is that I would absolutely never be on a reality show. Chris basically died laughing when I asked him if he could see me on Big Brother. He said I'd be the worst player in history because I'd feel so bad about making anyone else feel bad or having to lie to anyone. True.

Also, I'd pretty much just want to sit in my bed reading a book and would basically avoid getting involved in drama or talking to anyone. Producers would love me.

However, I might actually make a lot of friends because when I wasn't hiding in a corner with a book, I'd be in the kitchen whipping up treats like this. If they let me? I am still not totally clear what they eat on Big Brother when they're allowed to eat.

Do you think they'd have an ice cream maker stocked in the kitchen? Would they purchase buttermilk upon request? Could I bring my own? I have so many questions.

But I don't have any questions on my love for this red velvet ice cream. It's different from other ice creams in that it has a distinct tartness (not quite as intense as yogurt) from the buttermilk and a little bit of richness from the cocoa.

It's fun to get bites of red velvet cookie dough and obviously looks pretty in a cone. All very important things when it comes to ice cream, in my opinion!

I am clearly a huge fan of edible cookie dough and have lots of recipes that feature it! Here are a few of my favorites:

I'm sure this won't be the last ice cream you'll see around this blog this summer. Let me know if there are any flavors you've been dreaming of that you'd like to see me whip up!

Are you a reality TV fan, too? Or am I all alone in my television watching shame? 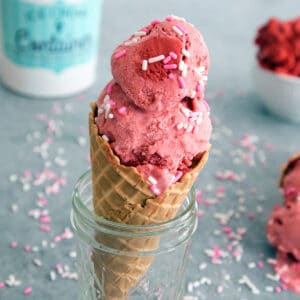 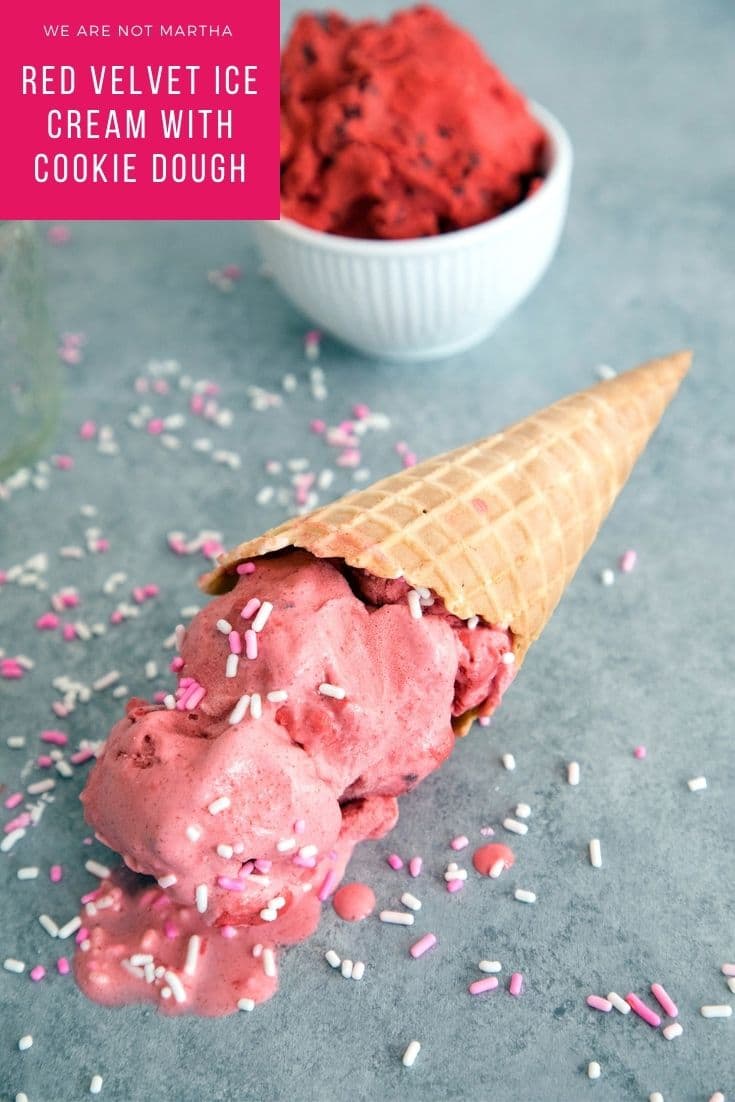