This easy-to-make Pear Simple Syrup lets you add delicious pear flavor to everything! Whether you're using it in pear cocktails or drizzling it on ice cream, over pancakes, or in coffee, you'll want a jar of this syrup in your fridge at all times!

Every time I cook or bake with pears, I think about how underrated they are. We talk nonstop about apples in the fall, but we often ignore pears.

This is my plea to give pears a little love this fall. And all year long.

While I'll always happily snack on a fresh pear, I also enjoy them in baked goods, in salads, and especially in cocktails. And the easiest way to get pear flavor into cocktails? Pear simple syrup!

What is Simple Syrup?

Simple syrup is essentially water and sugar simmered together until a syrup is formed.

It's a staple behind bars as it makes it super easy to add sweetness to a drink. And since you can make simple syrup in pretty much any flavor you can imagine, it also makes it an easy way to add flavor to a drink!

But simple syrup has a lot of other uses, from adding moistness to a cake to sweetening coffee. I'll outline more ideas for you below.

If you love pears and if you're especially interested in enjoying pear cocktails, you'll definitely want to try this syrup!

It tastes just like pears (because it's made with fresh pears!) and gives you the ability to add pear flavor to pretty much anything.

What Kind of Pears to Use

You can really use any kind of pear you want for this simple syrup. But I mostly use d'anjou because those are my favorites.

Bosc pears should also work well, but I don't think you can really go wrong.

Ripe pears work best, but even if your pears aren't super ripe, once you simmer them in sugar and water, they'll start to release their sugars!

Like with most simple syrups, you don't need many ingredients to make this pear syrup. Just three! Here's what you need:

How to Make Pear Simple Syrup

Like most simple syrups, this is incredibly easy to make!

Simply combine water, sugar, and chopped pears in a medium saucepan over medium-high heat and bring to a boil.

Once boiling, lower the heat and let the mixture simmer for about 15 minutes, until it has thickened and the pears have softened.

Wow, look at that transformation!

Strain the mixture into a bowl, leaving behind the pears.

Be sure to push down on pears with a wooden spoon or spatula to extract as much juice as possible.

Keep pear syrup in the bowl or pour it into a mason jar and place in fridge to cool completely before using.

Once it's cooled, use it however your heart desires!

You'll likely be delighted by how much this tastes like fresh pears. Obviously it's sweeter than your typical pear (by design), but the flavor is all there!

I've tried making this syrup with just one pear and it's also good, but with two pears, the pear flavor was much more prominent.

There are SO many ways to enjoy this pear syrup... Here are some of my favorites:

I wanted to keep this pear simple syrup as "simple" as possible so the pear flavor would truly shine. But there are lots of variations you could make on this recipe that would be absolutely delicious. Here are a few ideas:

You should always store your simple syrups in the fridge in an airtight container. When stored properly, the syrup should stay fresh for at least a month.

I like to store syrup in these 16 oz. mason jars or 8 oz. jars (what you see in these photos). You can even get lids with spouts for the jars to make pouring easy.

How to Make More

If you're making a big batch cocktail for a party or just want to have extra syrup on hand (who doesn't?), you can easily double or triple this recipe.

Since the syrup uses a 1:1 water and sugar ratio, it's very easy to increase as you see fit.

If you want to double this recipe, use 2 cups of water and 2 cups of sugar, along with about 4 cups chopped pears. If you only have 2 or 3 pears, this syrup will definitely still be tasty; I just like to pack in extra pear flavor.

Of course, I highly recommend that you make this pear simple syrup from scratch since it's so easy and delicious. But I also understand if you're in a rush or just want a nice bottle of pear syrup that you can keep for a long time (store-bought often lasts longer than homemade).

Pear isn't the most popular simple syrup flavor on the market, but here are a couple options of pear syrups you can purchase:

Once you make one simple syrup recipe, your brain is going to work overtime thinking about all the glorious flavor combinations you can dream up.

I have lots of recipes ready for you, but I urge you to be creative! Here are some of my all-time favorites:

I hope this pear simple syrup brings you all kinds of fall joy and carries that spirit right into winter... After all, there's really no bad time to enjoy pears! 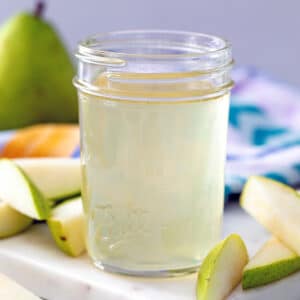 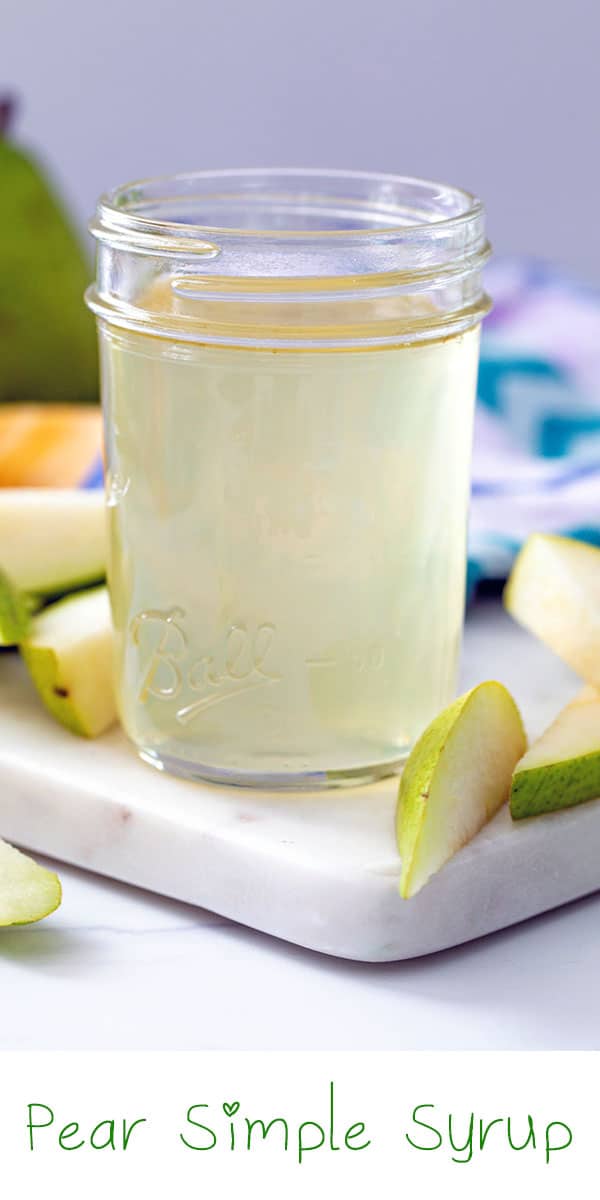